Diving Into Our History 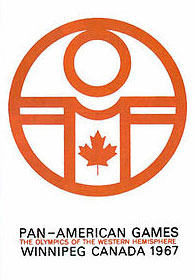 The Pan-Am Pool was built for Canada’s first Pan-Am Games that were held in Winnipeg in 1967. In March of that year, based on the unanimous decision of City Council, Winnipeg’s Mayor, Stephen Juba, made an application Canadian Amateur Swimming Association, which later became the Aquatic Federation of Canada, for the Aquatic Hall of Fame and Museum of Canada to be housed in the Pan-Am Pool. Vaughan L. Baird negotiated the application on behalf of the City.

One month later Winnipeg was informed that its application for the Aquatic Hall of Fame had been accepted. It was also to become the home of the National Archives for Aquatic Sports (swimming, diving, water polo and synchronized swimming).

Three years after that, on December 14th, 1970, the Aquatic Hall of Fame and Museum of Canada Inc. (“AHFMC”) obtained letters patent and it is therefore the oldest incorporated Hall of Fame in Canada. The original Directors were Mayor Stephen Juba, Vaughan Lawson Baird, Albert Frederic Ford, and Guy Simonis.

With successful lobbying from Vaughan Baird the VII World Cup of Diving was held at the Pan-Am Pool from May 1st to 5th, 1991 with more entries in diving than at the Los Angeles Olympics. It was the first World Cup of the aquatics to be held in Canada.

The Pan-Am Pool Complex was developed greatly in the ensuing years. In 1994, a new ‘warm up and warm down’ and training pool was added to the east-end. The success and legacy of the 1967 games and the Pan-Am Pool were prime factors in obtaining the Pan Am Games for a second time approximately thirty years later. Between 1997 and 1999, in preparation for Canada’s second Pan Am Games, again to be held in Winnipeg, a western extension was built with new and improved facilities, including increased exercise and training areas, with up-to-date equipment doping rooms, family change rooms, an indoor track, new cafeteria and in the pool, the latest timing and scoreboard system in North America.

In the meantime, the Aquatic Hall of Fame and Museum of Canada’s collection of sports memorabilia and artwork had increased tremendously and larger facilities were required. Vaughan Baird and board member Dr. Robert Thorlakson lobbied for federal funds to construct an addition to the original PanAm pool building that would be a major new entrance and exhibition gallery.

On June 15th, 1997, the AHFMC received a Coat of Arms from the Canadian Heraldic Authority, the first Hall of Fame in Canada to receive this recognition.

To foster recognition for the aquatic sports of swimming, diving, synchronized swimming and water polo.

Honour the athletes and coaches of these sports who have competed in the Olympic Games, Commonwealth Games, Pan-Am Games and World championships.

Honour deserving individuals who have fostered an appreciation of the aquatic sports, supported the athletes or coaches, or provided great leadership or support to the Canadian Aquatic Hall of Fame.

Provide access to information as it is the home of the National Archives for Aquatic Sports and museum of art, artifacts and memorabilia.

The Canadian Aquatic Hall of Fame gives the people of Canada (and others), an opportunity to learn, remember, and appreciate the sports, the people, and The Royal Gallery Collection through exhibitions, presentations, and inter-active media either on site at our beautiful 3,000 square metre facility attached to the PanAm Aquatic Centre in Winnipeg, Manitoba, or exhibits traveling throughout Canada.

A Pioneer for Canadian Aquatic Sports. Founder, Leader, Historian, and Friend. Without his tireless efforts, the Hall of Fame wouldn’t exist today. Thank you Vaughan for all of your work and inspiration.

Vaughan was born in Winnipeg and earned a BA at the University of Manitoba in 1949, and a law degree at Dalhousie University in 1952. His life-long passion for art, history, politics, and the French language was no doubt nourished by his post-graduate studies in French Civilization at the Sorbonne in Paris. In 1987, his academic distinctions were crowned by an Honorary Doctorate from the University of Winnipeg.

Vaughan’s distinguished law career was recognized with his appointment as Queen’s Counsel in 1966. One of his most cherished achievements as a lawyer was the successful challenge of the constitutionality of Manitoba’s English-only legislation that culminated with a favourable decision by Supreme Court of Canada.

The combative – some would say “pugnacious” – spirit that served Vaughan so well as a lawyer and litigator also served him well in sports, where he distinguished himself during his university years in swimming, diving and boxing. However good an athlete he may have been, it was as a sports administrator, fundraiser and official that Vaughan made his most enduring mark.

His particular devotion to diving led him to establish, in 1968, the Canadian Amateur Diving Association, now known as Diving Canada, of which he was at the time of his death the Honorary President. At the same time that he asserted diving’s independence from swimming, he helped to unite those two disciplines together with water polo and synchronized swimming under the umbrella of the Aquatic Federation of Canada.

Vaughan’s role as a chef de mission for Canada’s national diving team took him throughout Europe and the Soviet Union. A member of the Canadian Olympic Association and board member of the Commonwealth Games Association of Canada, the Amateur Swimming Union of the Americas (ASUA) and the Fédération Internationale de Natation (FINA), Vaughan also judged diving at the Olympic, Commonwealth, and Pan American Games and various World competitions from 1964 to 1990.

As a member of two of the committees planning the 1967 Pan Am Games in Winnipeg, Vaughan waged a successful year-long campaign to obtain federal funding to put a roof over the Pan Am Pool. His local contributions to sport also included his involvement in the founding of the Manitoba Sports Federation, which evolved into Sport Manitoba.

Always a great lover and patron of the arts, Vaughan was especially fond of painting and sculpture, and buildings and parks all over Winnipeg have been embellished with works that he donated.

A perfect union of his predilections for art, aquatic sports and history was formed when, at the request of Mayor Stephen Juba, he founded the Aquatic Hall of Fame and Museum of Canada in the context of the 1967 Pan Am Games. The curation and upkeep of the hall’s rich collection of aquatics-related art and memorabilia was one of his most cherished projects.

An incurable optimist imbued with an infectious joie de vivre, Vaughan generally met life’s adversities with a shrug of the shoulders. When it came to matters of principle, however, no one was more tenacious.

A three-time recipient of the Queen’s Jubilee Medal who was decorated by the Government of Peru for his 23-year service as an Honorary Consul, Vaughan earned many more honours and awards over the course of his lifetime, most of them acknowledging his contributions to sport.

The Vaughan Baird Polar Bear Classic Diving International meet which includes National Qualification and Provincial Level events is held every year at the Pan-Am pool and recognizes his enormous contribution to the sport.

He was inducted into the Manitoba Sports Hall of Fame in 1984 and appointed a Member of the Order of Canada in 1992.

He is credited with being an inspiration to a generation of divers and a guardian of Canadian aquatic history.

“We need and rely on people like Vaughan Baird,” said David de Vlieger, president of Swimming Canada. “He was a tireless supporter of aquatics in Canada. Canadian sport cannot survive without the work and dedication of people like him.”

Marcel Aubut, president of the Canadian Olympic Committee, praised Baird’s contribution to sport. “The sport of diving in this country has been permanently strengthened as a direct result of Vaughan Baird. His contribution, from the grass roots level all the way up to Canada’s Olympic movement, has left a lasting legacy from which Canadian athletes in and out of the pool will benefit for generations to come.”

Pierre Lafontaine, the former chief executive officer and national coach of Swimming Canada, remembers spending three hours at Baird’s home. “The man was so passionate about preserving and celebrating aquatics in Canada. The details of his passion for aquatics, not just diving, was brilliant.”

Scott Cranham, Diving Canada’s high performance director, said Baird’s vision for Canadian aquatic sports was far ahead of many countries. “He changed the lives of many through his tireless efforts, his persistence and willingness to fight until the end. His passion for the art of diving will be truly missed but the legacy he left behind will not be forgotten.”

VAUGHAN LAWSON BAIRD died Saturday, August 17, 2013 at his beloved home of Bel-Ami in Ste-Agathe, Manitoba having contributed so much to athletes, aquatic sports, the Province of Manitoba, and to Canada.